Two days ago the public group draw of Jarun Cup 2016 was held. In Beach bar next to the courts where through 4 days 71 teams from Croatia, Switzerland, Poland, Serbia, Hungary, Italia and the Netherlands will compete, the group draw for 3 age categories - 2000, 1998 and seniors (men and women) took place.

In 2000 boys category 8 teams will play in two groups and after that two best teams from each group will play semi-finals. In group A there are: two teams of Netherland’s national selection U16, Loret Beach Espana (SUI) and Hiekka Hauskaa (NED). All 3 Croatian teams - BHC Sesvete, Detono Zagreb and Jole’s Sand Moles play in group B together with Italian national selection.

In 2000 girls category this year we have 6 teams that will compete in two groups. Then the best teams from each group plays the final, whilst teams from second places in the groups compete for bronze medal. In group A there are: Chemo Profili Zagreb, Detono Zagreb and Lokomotiva 1, whilst in group B will play: BHC Dubrava, Lokomotiva 2 and ŽRK Sloga Sv. Nedjelja.

After group draw for the youngest category on the tournament, the draw for 1998 boys was held. The competition system in this category is the same as in the younger one, i.e. 8 teams plays in two group of four, then there are semi-finals and finals. All above mentioned categories play according to our tournaments rules, i.e. 2x7min, in case of a tie 1:1 the golden goal will be decisive.

Then the time for seniors came. This year’s women’s competition can be called the toughest in the whole tournament. From 13 teams that registered on tournament 6 regularly play and win the hardest European tournaments. Because of odd number of teams it was known before that one group will play more matches.

It showed up that the group A will be the bigger one and can be officially called the group of death. It’s because in this group will compete actual European Champions - Agenta Girls from Hungary, actual vice-champions - girls from Poland (Juko Gru Piotrkow Trybunalski), last season’s best Jarun cup team - Westsite and hosts - Detono Zagreb, Serbian girls from 2areg who may surprise their more experienced competitors, girls from OHC ‘01 (NED) who make significat developement every year and BHC Sesvete for which it will be very demanding debut in beach handball.

In group B there are two teams from Croatia - Chemo Profili Zagreb and actual Croatian Champions BHC Dubrava, two teams from the Netherlands - last year’s second medal winners - girls from Camelot, and girls from Voorwaarts. In the second group there will also play Swiss team Beachqeens and juniors of Hungarian team Multichem Szentendrei. The best teams from each group plays directly in the finals, whilst 2nd and 3rd places compete in semi-finals (2A - 3B, 3A - 2B). 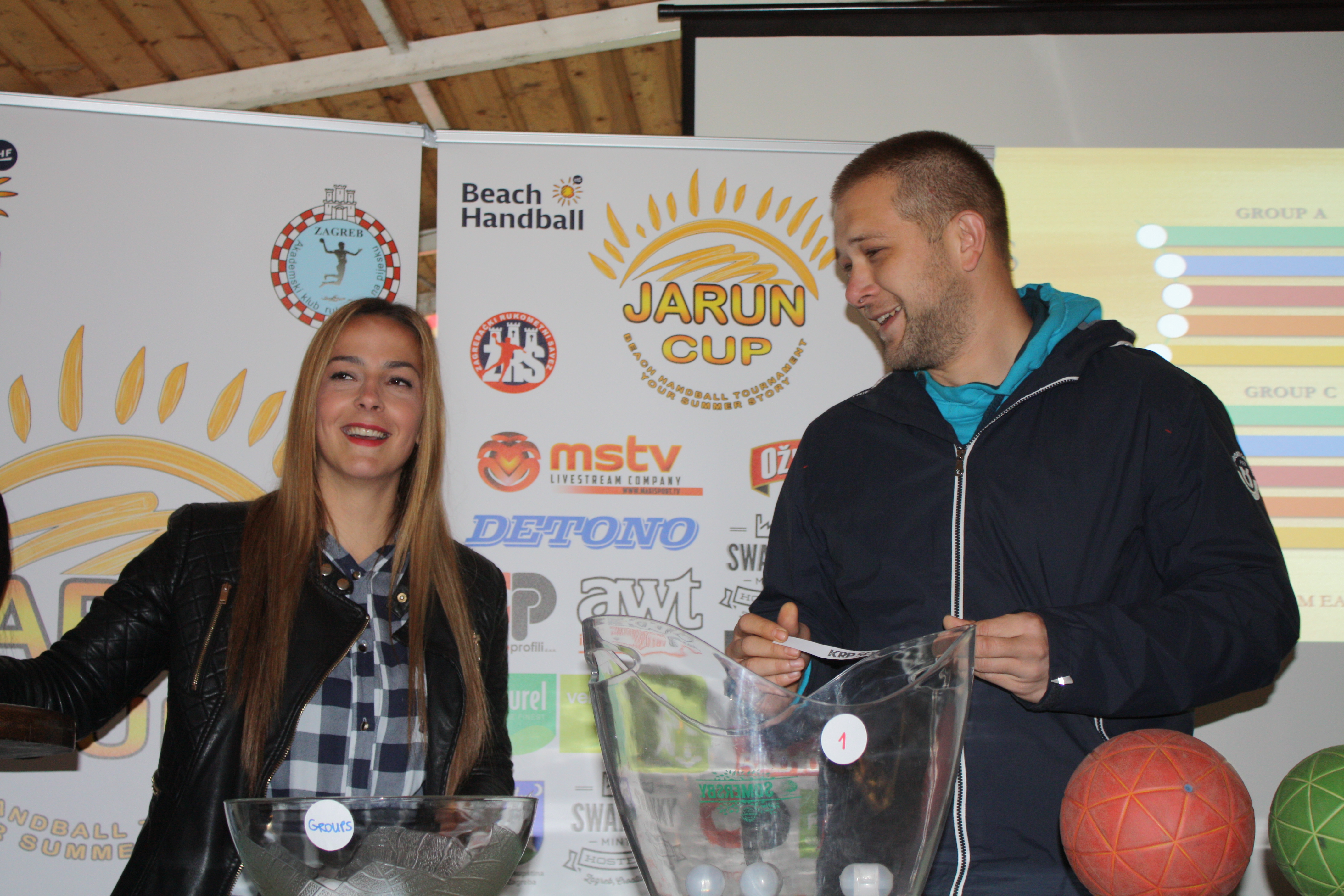 After group draw for women’s senior category, the men’s senior draw took place. 20 teams will compete in 4 groups. The teams from 3rd places will continue the tournament to achieve the 9th place, whilst two best teams from each group will play quarter-finals, and after the loos in that phase the teams continue the competition for places 5 - 8.

In group A there are all three hostÂ  teams, i.e. Detono Zagreb, Chemo Profili and AKRP Zagreb who play together with Italian club Gaeta ‘84 and second team of national Netherland’s selection U18. In group B there are two teams from the Netherlands - guys from Camelot and first team of national Netherland’s selection U18, Swiss club Loret Beach Espana and two teams from Croatia - BHC Čakovec and BHC Dubrava. Both in group C and D there is one team from the Netherlands and the rest are Croatian ones. In group C will play: US Amsterdam, second place winner at the last year’s Jarun Cup Let Cepelin Toma-soft, BHC Sesvete, KRP Nevažni and the new Croatian team of Falco Aeterna. In group D there are: Hiekka Hauskaa (NED), third place winner on the Jarun Cup 2015 KRP Sokol, Centro Team Sesvete, White Boys and TV Zapad.

The youngest age category that plays between 28th April and 1st May has only 4 teams so the competition system didn’t demand the group draw. Because of very big number of participants we had to postpone the competition of 2004 and 2006 categories. It means that the Jarun Cup for the youngest beach handballers lasts till 8th May (the competition will be held on 7th and 8th of May). We believe that way we will be able to pay more attention to our youngest participants.

We wish everyone all the best, let the sport and fun win!